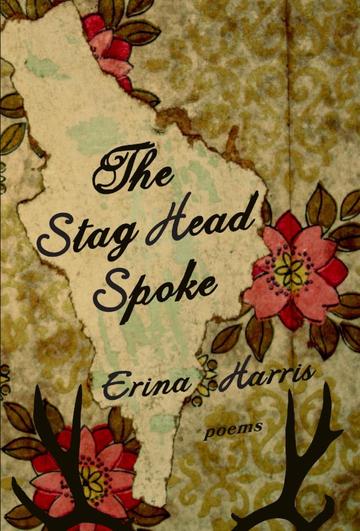 "A Species of Apprenticeship": Why it Took 10 Years to Publish The Stag Head Spoke (Literary Press Group of Canada, 07/07/2014)
"The Stag Head Spoke is a highly polished debut, with a sophistication of form and language rarely seen in a first collection."

Ready to Launch: Buckrider Books (Kris Bone, The Town Crier, 21/04/2014)
"Harris’s poetry was haunting and highly refined. Drawing on the traditions of a wide variety of forms (such as the sonnet and the fairy tale) to explore rhyme in new ways, Harris has created an atmospheric set of poems, delivered in an even yet ethereal tone."

Down the Rabbit Hole (Al Rempel, ARC, 03/02/2015)
“In her first book of poetry, The Stag Head Spoke, Erina Harris’ dark and complex verse takes her readers down a rabbit hole. Harris removes our footing; what we catch in terms of characterization, or setting, or conclusion, what sense we make from syntax, comes through collage and glimpse and echo. Her expert play at language, reminding me at times of Dennis Lee’s work, acts like — to modify Lewis Carroll’s metaphor — setae or bristles on an earthworm.”

Review (Jessica Rose, Room Magazine, 01/12/2014)
“With careful precision, Erina Harris toiled over and tinkered with The Stag Head Spoke for ten years, finely honing her craft as a poet. The result of this quest for perfection is an innovative and stunning debut that is steeped in nostalgia, but is never sickeningly sweet.”

"E Martin Nolan on Erina Harris: The Stag Head Spoke" (E Martin Nolan, Lemon Hound, 10/11/2014)
"Every poet controls language, but few poets can create Harris’ energy level, and if they do, few are able to contain it with such deftness. This is world-class poetry of the highest order. Harris has upturned the tables of poetry, and reset them exquisitely, all while digging deep into the reader’s heart. Buy this book, but be ready for it."